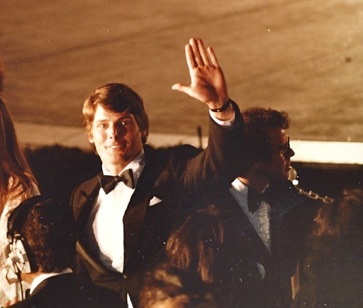 Dave left for work, I took Katie and Aaron to school – one at a time on the back of my Vespa scooter, and then I began my morning routine. Clean up the kitchen. Put away clothes and toys scattered around the family room. Start a load of laundry. Run the vacuum. I was living my dream, in sunny southern California no less! But my dream had its ho-hum moments.

A segment on the local (L.A.) news stopped me in my tracks. A reporter, sitting in the bleachers at the Dorothy Chandler Pavillon, enthused about that evening’s broadcast of the Academy Awards. Hollywood’s most glamorous night. She finished, as the camera panned over the nearly empty stands and the red carpet in front of them, by inviting viewers to join her there and watch “the stars come out for the Oscars.”

I went into a star struck trance. I dropped the toys and clothes and made phone calls to find a friend to go with me, arranged for after school care for the kids, let Dave know where I’d be and to pick up dinner and the kids on his way home, and filled a tote with drinks and snacks. Two hours later, my friend and I found places to sit in the front row of the bleachers. We had a five hour wait until the stars began arriving.

What to do? Watch the fans, of course. As people settle in, they produced am amazing variety of gourmet foods, which they happily shared. Professionals gave everything from hair cuts to manicures and massages. A comic, pretending to be a therapist, gave outrageous advice on relationships. A fan held up photographs of nominees in the best supporting actor category one by one, The audience voted by applause, whistles, and cheers for their favorites. And so on through he major nominations. In the end, the pictures of the “winners” in each category were held up. I overheard many stories of personal encounters with the stars. These usually ended with the star rated as wonderful or a real bitch. We saved each others seats for bathroom breaks.

Memorable moments: The red carpet was cleared so Ray Bolger could do his Wizard of Oz scarecrow walk to “If I Only Had a Brain.” The fans in the stands, including me, went wild Dolly Parton, nominated for her song “9 to 5” glittered more than any of the other actresses. The movie business is known as the skin game. Raquel Welch and Sophia Lauren showed a good bit of it. My favorite among the leading men was Christopher Reeve. Superman! Gene Kelly also danced his way along the red carpet. “Singing in the Rain” played. The crowd sang along. His partner, of course, was a black umbrella. Everyone cheered. The greatest actor in the world, Lawrence Olivier, as was his oft stated goal, almost sneaked along the whole red carpet without being noticed, but my friend recognized him and shouted his name. Olivier looked up at us as if he’d been caught with his hand in the cookie jar. And then gave us a great smile. Click.

This went on for two hours. As soon as the last stars entered the theater, a crew began tearing up the red carpet and carted off the big, gold Oscar statues that flanked the doors. My friend and I drove home. The Academy Awards show was half over by the time I got there. The kids were asleep on the couch in the family room. Dave on the floor. Toys and clothes right where I had dropped them that morning. I turned off the TV. Sent my family to bed. Went through my morning routine before watching the 12:30 a.m. rerun (no DVRs in those days!) of the broadcast. As I worked, I hummed to myself “I’m singin’ in the rain, Just singin’ in the rain, What a glorious felling, And I’m happy again.”