The list of those in our family and those among our friends who have served in The United States Armed Forces is long and begins with Dave’s grandfather, William Murdoch who served during WW I. Fortunately, for me, the list of those I knew who made the ultimate sacrifice is very short.

Captain Eric Zigler died in an airplane crash June 30, 2008. He served in Japan, Germany, and flew over 300 hours in Iraq, He was piloting an F-16C jet over the desert north of Nellis Air Force Base Nevada, where he was attached to the 422nd Test and Evaluation Squadron. His mission was to put the jet through its paces in a simulated “dog fight.” Apparently he lost consciousness while engaged in a maneuver that caused him to experience 8-9Gs. He was married to Dave’s God daughter née Sarah Kotte. I did not know Captain Ziegler very well, but did know he was an outstanding officer and an excellent husband and a wonderful father to Anna.  I was deeply saddened upon hearing he had died. 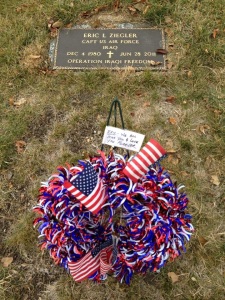 The last causality of the Vietnam War.  That is how I think of My-ca Le.

I met My-ca when he was five years old. I became acquainted with his father Daniel Le when I took a free lance writing job. Mr. Le and his family had fled Vietnam at the end of the war. He was writing a paper about the “boat people” and their experiences in refugee camps. I was engaged to check grammar and syntax. He would bring the work to my home and pick up the corrected pages a few days later. Before one of these visits, Mr. Le. called and asked if it would be okay to bring along his wife and their two sons. Of course it was.

Much to my surprise, I discovered that the older son, My-ca, was going to be in my kindergarten class that fall. In spite of the language barrier, My-ca and our son Aaron, who was about the same age, immediately became good playmates. From then on, My-ca was a regular visitor to our home. Dave and I were invited to social gatherings hosted by the Lees.

My-ca was a beautiful little boy. Quiet, of course, because of the language difference. He did participate in Show and Tell and became a quick learner. The boys in class liked him because he didn’t shy away from rough and tumble play ground games and he could run faster than any of the other boys. Even though most of them were bigger that he was. It made me smile to see his thick, dark hair flying as he darted here and there. After my work for Mr. Le was completed and I had taken a different job, I lost contact with the family.

On July 23, 1982, Dave woke me early in the morning and told me he’d heard on the news that My-ca had been killed in an accident. In the midst of our shock, we realized we had a problem. How to break the news to our son Aaron. Dave took on that sad task, behind the closed door to Aaron’s room.

The accident was that infamous and controversial helicopter crash that took place during the filming of TWILIGHT ZONE THE MOVIE.

In the scene being filmed, actor Vic Morrow was supposed to carry two children, played by Renee Shin Yi Chen, and My-ca Dinh Le, across a river with a helicopter bearing down on them. The movie footage of the scene suggested that John Landis had ordered excessive explosives for greater effect and the helicopter to fly lower than usual to increase the drama. The explosion ripped the tail rotor off the helicopter and sent it into a downward spiral. The wash from the larger blades whipped the air and water into a frenzy. Vic Morrow managed to hold onto Myca, but lost his grip on Renee. He was trying to rescue her from the swirling water when the helicopter fell into the river killing all three,

Dave and I attended My-ca’s funeral. At the front of the church, which was resplendent with flowers, the coffin looked so small. A sad reminder that we were there to bury a young, innocent child. A real boy who had survived the real war in Vietnam and made it to America. Only to die in a recreation of what he had escaped. The irony was too painful.

For many years, Dave and I visited My-ca’s grave on Memorial Day. In those moments I put aside everything about his death and thought of the quiet, little boy who could run faster than any of his classmates. His thick, dark hair flying, 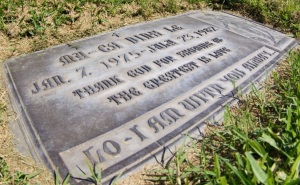 My condolences to the families and friends of those who made the ultimate sacrifice in service to our country. And to those men and women who did so, my never ending  gratitude.

4 thoughts on “ME AND…Memorial Day”